Chart it, swatch it and see!

While learning from the Craftsy Class: Lace Shawl Design, with Miriam Felton, I followed her instructions to go to stitch dictionaries to find patterns for particular motifs. In this case, I was looking for "leaves."

I found so many variations of leaves and noticed the designers use one of two ways to delineate a leaf on a background: with yarn-overs that produce holes around the leaf, or with purl stitches that raise a stockinette stitch leaf above the ground with yarn-overs accenting the center vein.

A good example of the latter method is illustrated in a free pattern from the website: Knitwise Girl, and can be found here. 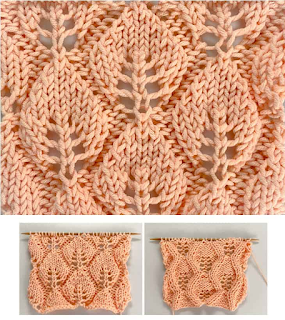 Would that work for a hat, knitting on the right side, in the round?
First, I knit a swatch that included 4 pattern repeats, and one and a half row repeats.
I wanted to work several rows as illustrated, then eliminate the half-drop repeat that fell between two leaves to add shaping to the fabric, to create a crown for the hat.
Using the written instructions I created a chart, but in doing so, I made the error of reading the even-numbered row (WS) from right to left. It didn't matter, until row 15, and while looking for a solution, I scrolled down and saw the author's chart below instructions, as well as a link to watch the video on YouTube.
"When all else fails . . ."
Here is the original chart by Christine (aka Knitwise Girl) 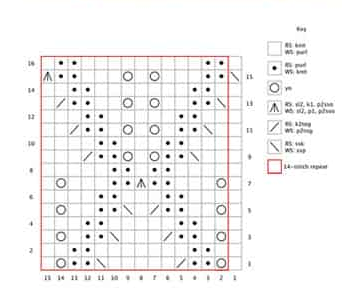 How many leaves do you see?
At first I thought I saw three: one whole one in the middle, and one on either side. But that was my brain having a mind of its own and making the leap to make me believe I saw more than was there.
Now look at the chart after I ruled out the purl stitch border: 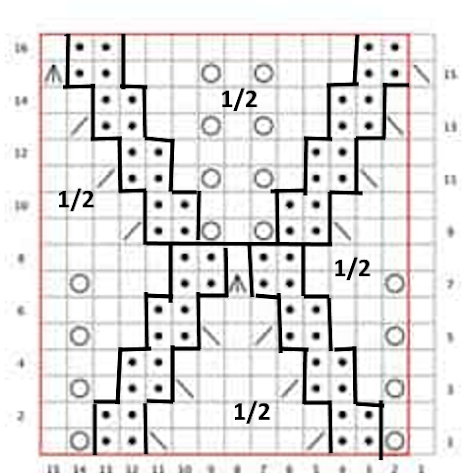 There are only two leaf motifs, neither of them shown as a whole image. That is why it's helpful to make your own chart, and expanding it as much as you need to see a 'whole motif."
When you have a half-drop surface design, you will have some half motifs within a square or rectangle. Miriam Felton recommends swatching at least 4 repeats of a pattern from a dictionary (which are often charted in a rectangle, and knit flat.)

The chart after isolating the leaves to decide how to modify the pattern for shaping:

Here I have 'decresed' 2 stitches in row 9 and 10, 4 stitches rows 11 and 12 - progressing to having decreased 8 stitches per half-pattern row repeat, just by not doing the yarn-overs.
But  I wanted that purl border to be yet narrower. By doing a decrease on either side of the middle, I can cut down the number of stitches from 5 to 3.
I tried a center-double-decrease in the swatch, but it didn't give me the appearance I wanted. The nature of the purled border around the stockinette ground motif is to recede, so the leaf appears to lift forward. Therefore I had to find a purl decrease that does not attract any attention, but blends into the background as much as possible.
So I hit the books and videos to find as many ways to make a purl decrease on the right side of the fabric as possible, and made a swatch to document what I found, using the same size needle and yarn as my pattern swatch. 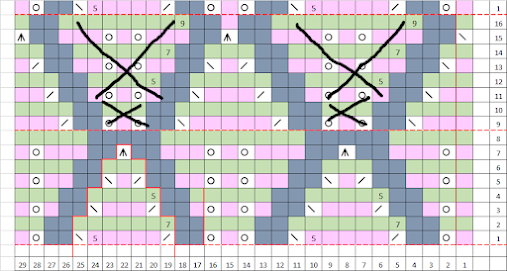 Charting alone does not work for me. I need a chart reference but must knit on the swatch to see what works best in the specific project.
Decreasing for the top of the head:
I picked up the knitting at row 8: There are several ways to decrease a pair of purls
After trying and 'tinking' (knit spelled backward, aka ripping) alternate ways to decrease a purl stitch on the right side to find a pleasing appearance, I chose one and continued the pattern until every other leaf was gone (in the 'half drop' - see the chart above.)
My wig stand came from a big-box fabric store and was on sale for $5.
Hat  Swatch: 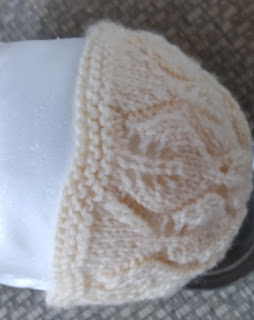 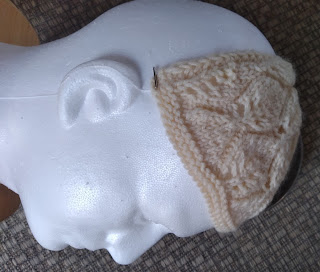 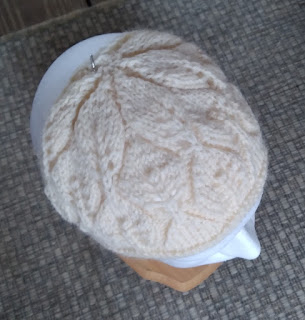 Posted by Elaine Rutledge at 8:41 AM No comments:

Healing - grand but it itches

Thank you to the faithful followers - as few or as many as you are.

I'm recovering from back surgery. Surgery went very well! Pain relief was immediate, even after the drugs wore off. It was for lumbar stenosis, a very painful thing. If you have sciatica, numbness, and pain - especially in the left leg - get thee to an MRI. It is easier to fix early on.

Computer time is limited until next month.

One more thing -  I am getting a "lumbar kneeling stool" - it is better for your back than a chair.

Edit: Today, August 2, 2022, I saw the doctor for my "post-op" visit. I asked him about the stool, and he does not recommend it as being very hard on the knees.

The best advice is that whatever you do- take breaks. If sitting at a computer, get up and walk around. If standing at the drafting table - sit down with a cup of coffee (or glass of wine?)

The draft of the new article should be done soon. Title: "Will this Work?"

Posted by Elaine Rutledge at 6:02 AM No comments:

This is an example of a chart I modified as an example. It is NOT a real chart, and any resemblance to a published pattern is purely coincidental.

It was too wide to be shown clearly in this space so I have sliced it, and presented it in 2 pieces. 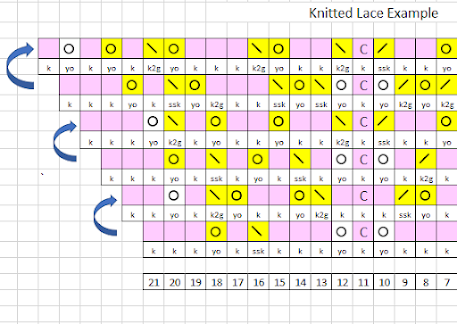 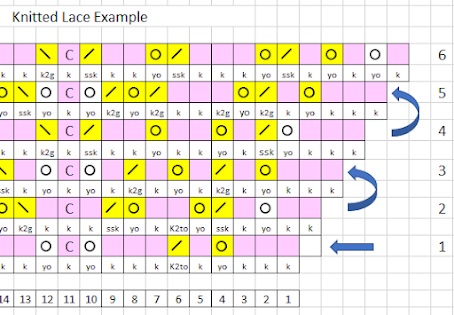 Posted by Elaine Rutledge at 8:53 AM No comments: 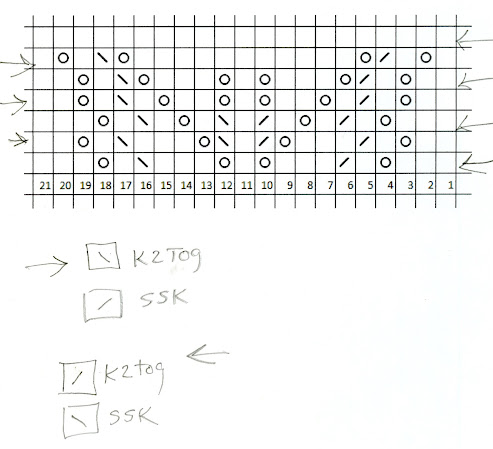 Posted by Elaine Rutledge at 10:53 AM No comments:

The examples below are ‘lace knitting’ because the row following the pattern row is a basic stitch (knit or purl). 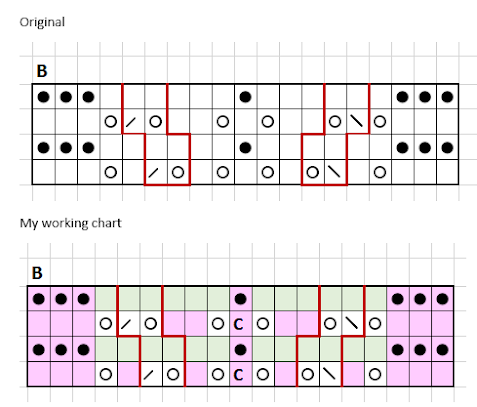 This Chart would be knit FLAT.
Notice that on the even rows (WS) the opposite is worked: 'Knit' becomes 'Purl,'
and 'Purl' becomes 'Knit.'
Below is a partial chart of a ‘Bead Cluster’ – found on pg 95 of the Magic of Shetland Lace Knitting, by Elizabeth Lovick, Pub 2013.

Posted by Elaine Rutledge at 7:46 AM No comments:

The Turtle Is my Spirit Animal

The Legend of the Turtle

In a dark hollow beneath the forest, an egg began to wobble. The force of the movement caused it to roll a bit in the dark moist dirt. A crack appeared. Then another.

Nothing happened for a few moments, as if the egg needed to rest.

Then a gentle wiggle, and a whop, as the crack grew wider.

Suddenly a claw emerged, with long nails, curved and sharp. The claw was ugly, as if to proclaim the emergence of a horrid creature.

But what followed the claw from the crack in the shell, was a beautiful creature. So stunning in its beauty it shone brightly in the darkness.

Little by little the creature made its way to the opening in the hollow, as if by instinct, seeking the light, and following it to emerge into the brightness of a green spring.

Blinking its eyes against the harsh light, the little creature became aware of hunger. Far in the distance it spied a bush, laden with bright berries. The bush with its fruit beckoned to the creature, as if in invitation, to tea.

As lovely as the creature was, it felt sluggish, and moved slowly. So slowly did the creature move, it caught the attention of a hawk.

The creature heard this cry and cowered under the leaf, afraid to move any further.

Then, as it quivered in fear, it attracted the attention of the snake. The snake cried: I will win the day!

I see a creature of such great knowledge, and when I swallow it, I will be the smartest creature on earth, and will win the day!”

The creature stilled its tremors and avoided discovery by the snake.

As happens in the forest, a fox smelled a tantalizing aroma, and lifted his head to focus on the source.

He howled: I have found the most delicious, fresh meat! When I swallow it, I will become the craftiest creature of the forest and will win the day!

Then the creature looked at the bush, with the berries, so far away. I am so hungry, it said. Surely, I will die if I can’t eat those berries. But I am so afraid. I am too slow, too beautiful, and too wise for this world. I will surely die. Weary with the struggle, the creature fell to sleep, with only a prayer in its heart to the everlasting Father of the forest and all creatures.

Later when the creature awoke, the first thing it saw was the bush with the wonderful berries. Hunger forced it to move. But it was even slower than before its nap. Still, it struggled forward.

The hawk swooped upon the creature, and just before grabbing it up in his talons, saw only a rock. I was mistaken, he surmised. It happens.

The creature moved forward a few more steps, attracting the attention of the snake, who slithered forward, with the taste of the creature on its tongue. But when the snake was ready to strike, all he saw was a rock. I was mistaken, he surmised as he slithered away. It happens.

Hunger screaming in its belly the creature ventured forward a few more steps. Aha, said the fox. There you are! But just as the fox prepared to pounce, he saw only a rock. Harrumph, said the fox. I suppose I was mistaken. It happens. And he darted off to chase a butterfly.

Whew, close call, said the creature. Ever so slowly it took a few more steps and realized he was directly beneath the berry bush. At last! Thank you, dear Father of the forest. I am saved! He cried.

Thus, the turtle spent the summer in glorious splendor, eating and smiling. He filled his belly full for another long winter sleep in the hollow, under the floor of the forest.

Posted by Elaine Rutledge at 11:18 AM No comments:

How I Chart Patterns, The Short Version. . . 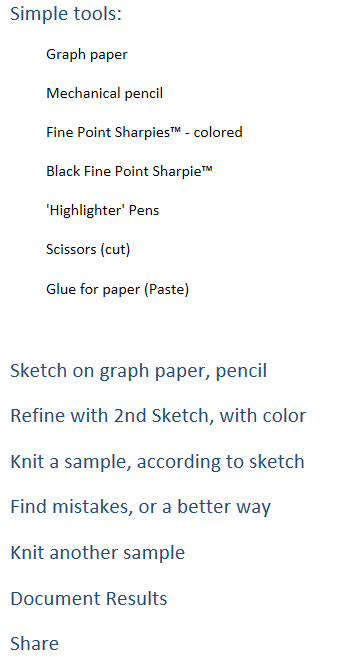 Posted by Elaine Rutledge at 11:14 AM No comments: 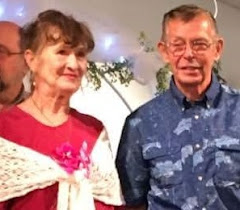 A few aspects of who I am